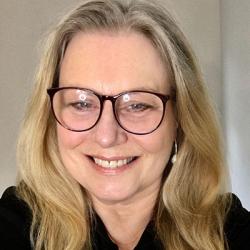 Jennifer van Sijll is a scriptwriter, instructor, consultant, and speaker based out of Los Angeles.

Van Sijll is a master teacher having taught at UC Berkeley and San Francisco State University as well as internationally. She’s the bestselling author of  Cinematic Storytelling which has sold over 150,000 copies and has been published in 12 languages.

She has scripted nearly 100 documentaries for clients like China Central Television, the Computer History Museum and independent producers. She has written for shows like China Insight, the 4th most popular show in mainland China with viewership of nearly 1 billion.

Van Sijll has an MFA from USC’s  School of Cinematic Arts.

Van Sijll is a prolific speaker, having delivered presentations on Cinematic Storytelling to Pixar, Nestle, Google, China Central TV (CCTV) as well as at the Los Angeles Screenwriters Expo. Her seminars have been featured on TV, radio and two documentaries.