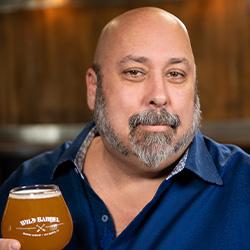 Bill Sysak is known in the inner circle of craft beer-dom as a master of zymurgical knowledge and is a Certified Cicerone®. In 2009, he joined Stone Brewing Company as the beverage supervisor and became the craft beer ambassador, putting on unparalleled beer and food pairing events and created festivals such as Sour Fest and Oakquinox. In 2016, Sysak co-founded Wild Barrel Brewing Co. One of the most knowledgeable craft beer experts in the industry, Sysak has been featured in such publications as The New York Times, the LA Times, Draft magazine, Imbibe, and Food & Wine. He can also be found on the popular podcasts “New Brew Thursday” where he does a weekly “Master Pairings” segment; and “Expert Drinking” where he educates fans on the best of craft beers, fine wines, and spirits.