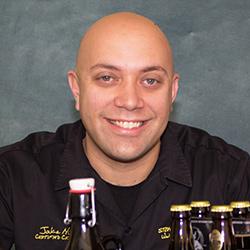 Jake Nunes is a veteran of San Diego's food and beverage industry and has over 20 years of experience with a focus on management and bar leadership. He developed his passion for craft beer in 2003 while working at Karl Strauss and has since proven himself to be a true craft beer enthusiast, having sampled thousands of different beers and visited more than one hundred breweries. In addition to Karl Strauss, he has held positions at a number of breweries and craft beer establishments including: Ballast Point Brewing & Spirits, Stone Brewing, Green Flash Brewing, Tiger! Tiger! Tavern, and he is now Beverage Coordinator at Burgeon Beer Co. Nunes was awarded the title of Certified Cicerone® in 2011.