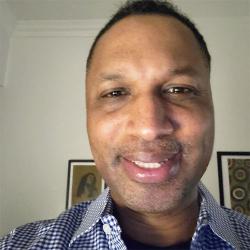 Dr. Roy Whitaker is an Associate Professor of Religion in the Department of Religious Studies at San Diego State University. He is affiliated faculty in Africana Studies, Weber Honors College, and the Master in Arts in Liberal Arts and Sciences graduate program, as well as Director of the Metropolitan Area Pluralism Study. He earned his first Master’s degree at Princeton Theological Seminary and second at Harvard University. He obtained his Ph.D. in Philosophy of Religion and Theology at Claremont Graduate University. His research interests include Africana philosophy of religion, African American religious pluralism, and religious diversity in hip hop culture.